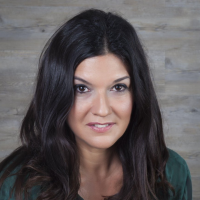 Rosario Raro (Castellón, 1971) has a doctorate in Philology. She studied Creative Writing Technique at the Universidad Mayor de San Marcos and the Pontificia Universidad Católica de Perú, where she lived for a decade. She took a Post-Graduate in Business Communication at the Universitat Jaume I and another in Pedagogy at the Universidad de Valencia after receiving her undergraduate degree.

In 2009 she was one of the only Spanish finalists in the Virtuality Caza de letras writing competition run by UNAM and Alfaguara in Mexico. She has given numerous conferences and runs a creative writing class at the Universitat Jaume I de Castellón.

She is also the author of several other works, including Carretera de la Boca do Inferno (Road to the Mouth of Hell), Surmenage, Perder el juicio (Losing Your Mind), Los años debidos (The Due Years), Finlandia, La llave de Medusa (Medusa’s Key), Desarmadas e invencibles (Unarmed and Invincible) and El alma de las máquinas (The Soul of Machines). Her work has been translated into Catalan, Japanese, and French and won numerous national and international literary awards.