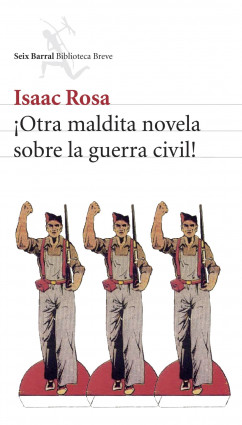 Another Damm Novel about the Spanish Civil War!

This is the story about the way the past haunts the present, told through two intersecting narratives: that of Julian Santos, a writer who receives an unusual commission, and Gonzalo Mariñas, a skilful politician with a lot to hide. A mystery begins. But while we are reading this novel, an anonymous reader breaks into the story and decides to boycott it. A critical voice has infiltrated the text and begins to point out its weaknesses, often laughing hysterically at the author in the process. This is a novel that works on different levels. On one hand, it can be read as a conventional narrative, on the other, it can be read as an open and participatory work of meta-fiction. The result is an experiment unique within Spanish fiction: a critical and incisive reading of reality, told in «real time». After the successful reception of El vano ayer (six printings, critical unanimity, national and international awards, translations into various languages…), Isaac Rosa returns with an apparently lucid book, whose acid humour allows for reflections about reading and writing, literary conventions, as well as an ironic exploration of the different literary tropes that are applied to the increasingly popular genre of «Spanish Civil War novels».