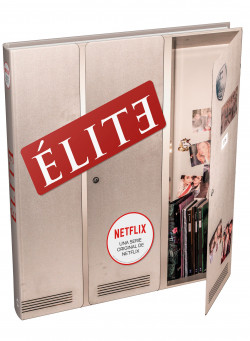 Everything you always wanted to know about the universe of Las Encinas in an exclusive illustrated book with more than 200 photos and many surprises inside.

Beyond the loves and shakeups of the teenagers of Élite, behind their ordinary and sometimes tragic experiences, there is a lot to think about: social class, prejudice, human ambition, toxic relationships, passions, and weaknesses. Élite is much more than a series about teenagers, and it has attracted a public of all ages.

This is the book every fan of Élite has been waiting for. Dive into the series’ creation process: the script, the characters, the sets, the dressing rooms. Everything you always wanted to know about the universe of Las Encinas in one illustrated book with many surprises inside: stickers, games, and never-before-seen photos.

The book contains instructional material and abundant information from the team that put together Élite. All the things fans need to understand the show and find out its secrets: the inspiration behind its look, how the actors and actors created their characters, their evolution across the first and second season, how they’ve dealt with their worldwide success… There is even a betting pool at the end so you can make your guesses about the third season.