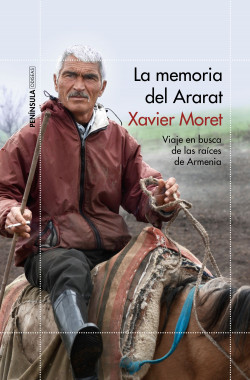 THE MEMORY OF ARARAT

This is the story of a lengthy journey that really began long before the journey itself, with the spread of Armenian culture that we’re all very familiar with perhaps without knowing it: Arshile Gorky, Charles Aznavour, Atom Egoyan, William Saroyan, the band members of System of a Down… It is the Armenia promoted and internationalized by the Armenian diaspora, which numbers many more than the three million who currently live in the ancient country.

Leaving the capital Yerevan and touring the fascinating monasteries of Geghard, Khor Virap, Tatev and Haghpat, as well as Echmiadzin (the Armenian Vatican), lake Sevan and the non-country of Nagorno Karabaj – the scene twenty years ago of a war that left 20,000 dead – Xavier Moret carries out an in-depth exploration of a land obsessed with Ararat, the mountain where, according to legend, Noah’s Ark settled after the flood, the beginning and end of all things Armenian in spite of the fact that the vagaries of fate place it in modern day Turkey.

But this journey is also a tour along the still raw open wound of the genocide that in 1915 ended the lives of a million and a half Armenians.  However, it is still very much alive in the memory of the descendants of the victims, who experience their Armenian heritage in many different ways in a combination of nostalgia, pride and pain.

A journey through Armenia, an ancient country with an open wound: the 1915 genocide whose 100th anniversary is this year.