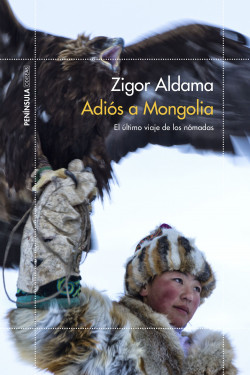 The final journey of the nomads.

It is estimated that every year, some 40,000 nomads abandon their traditional lifestyle and set down roots in one of the cities of Mongolia. This means that this lifestyle may disappear from the country in the next fifty years.

After living with twenty nomad families and interviewing many others that have decided to try their luck in the concrete jungle, this book tries to explain the reasons behind this radical change while also allowing the reader to voyage all through Mongolia during the four seasons of the year.

We see up close the customs of ethnic minorities like the kazakh one—falconers who hunt with their birds, and whose teenage members are leading a minor feminist revolution—and the tsaagan, who still practices reindeer husbandry. The book explores the controversial mining sector, plagued with illegal gold prospecting, and the impact of climate change and technology on the new lifestyle arising in the cities. In Ulaanbaatar, the coldest capital city in the world and, in wintertime, one of the most contaminated, we see the lives of those who haven’t achieved wealth in the city, witness the rise of the neo-Nazi movement, and explore the ideological thaw that has allowed a new LGBTI movement to flourish along with a rising moneyed class.